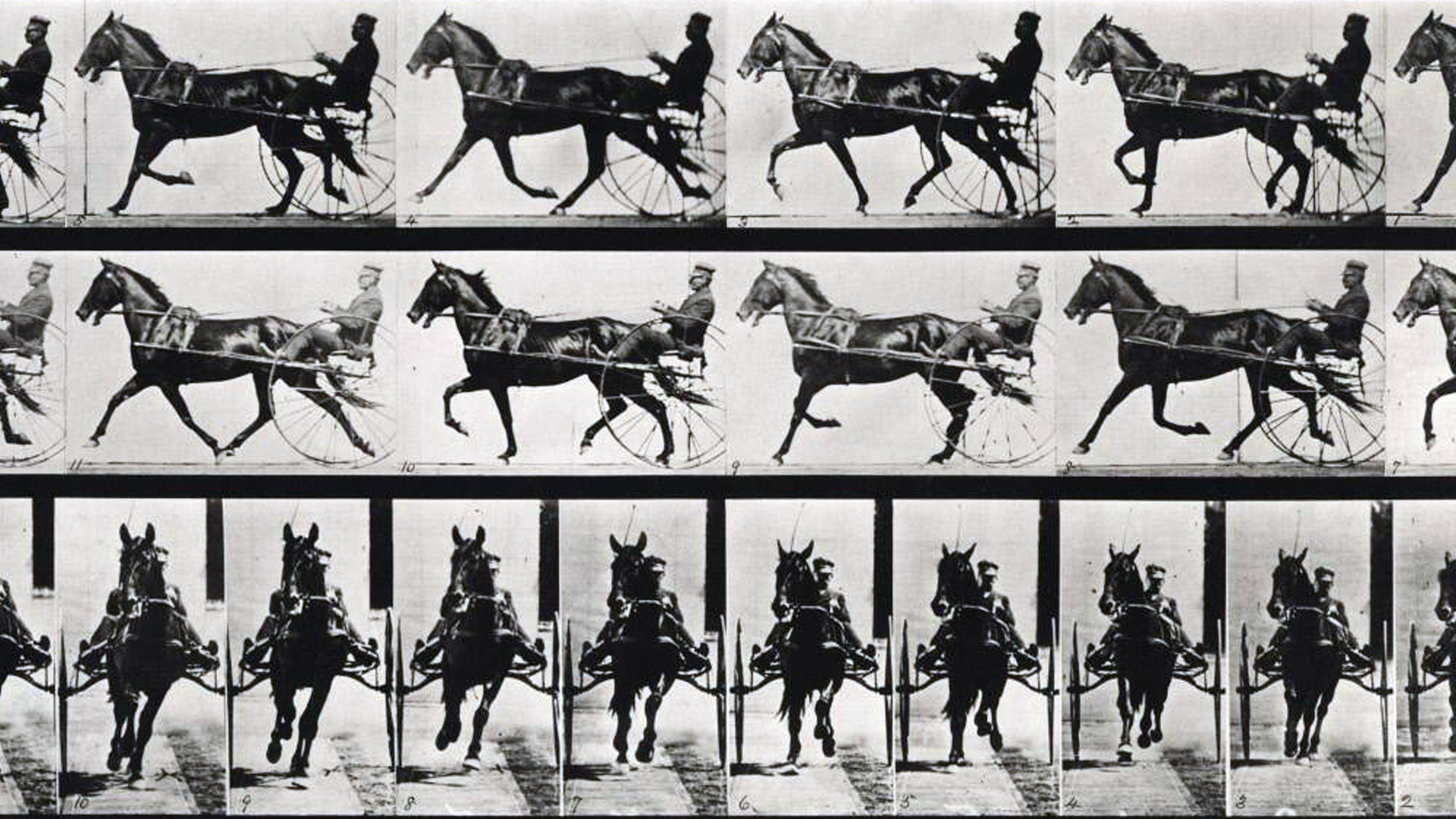 In this series we are learning about the history of photography together and doing activities that help us understand early photography. Today we’re going to talk about something that pretty much everyone likes – movies! We’re going to learn about the photographer who created the first motion picture, a man named Eadweard Muybridge. Then you are going to create your own motion pictures using two different methods – the flipbook and stop motion. 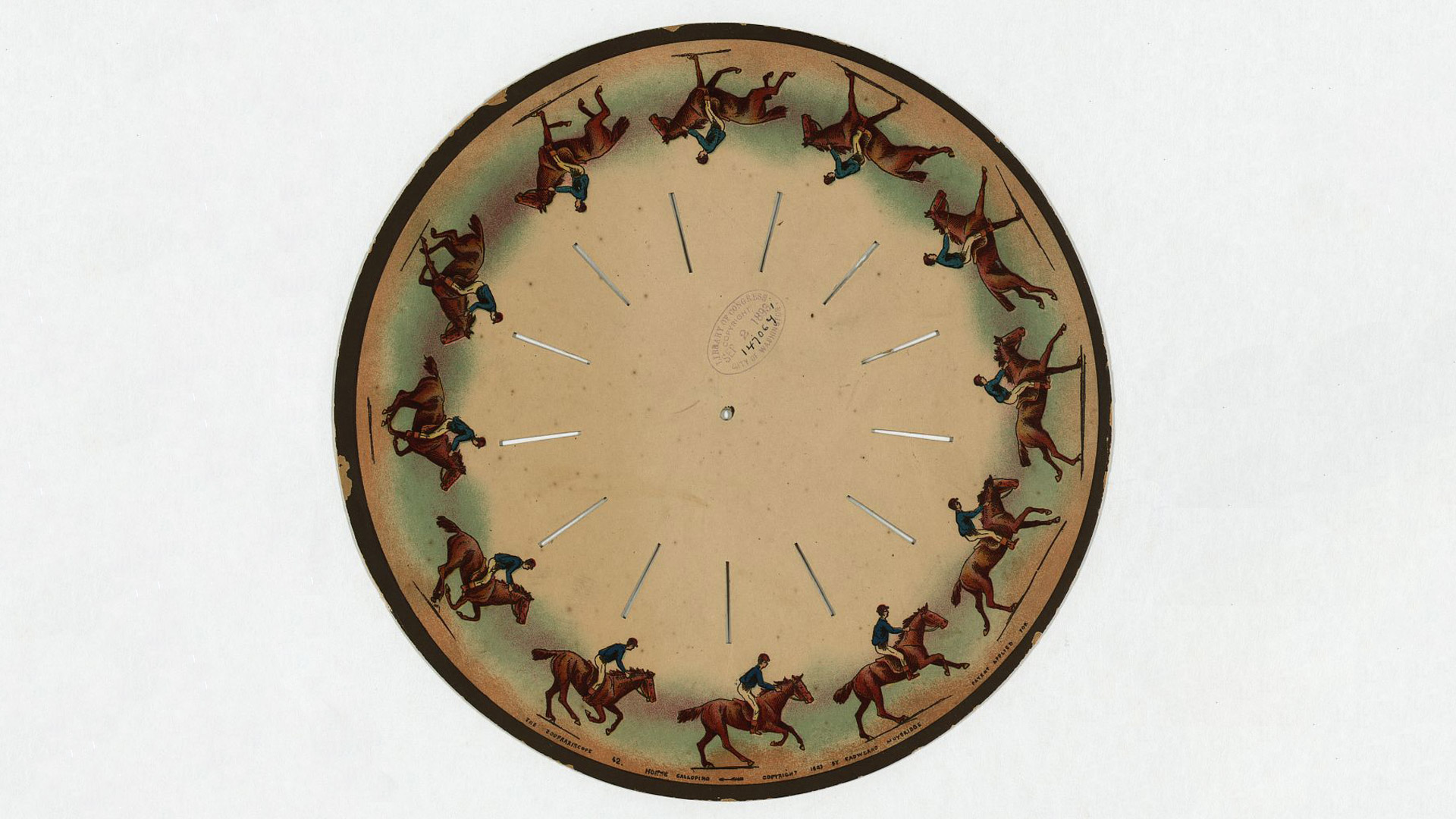 Eadweard Muybridge was a photographer who first became famous for his photographs of American landmarks, like Yosemite Valley. He actually ended up taking the photographs that led to the first motion picture because of a bet.

A man named Leland Stanford, who owned race horses, had a bet with other businessmen that all four of a horse’s hooves came off the ground at once when galloping. The other men thought that at least one hoof was on the ground at all times. Stanford hired Muybridge to photograph a horse while galloping to prove his hypothesis. His idea was a hypothesis because it was an educated guess that still had to be proven.

Muybridge’s experiment was to set up 12 cameras along a race track. There were wires strung across the race track that were attached to each camera. When the horse ran through each wire, the corresponding camera took a picture. This meant that he would have a picture of each phase of the horse’s movement. Stanford invited the businessmen as well as the press to watch Muybridge’s experiment in action. And it worked! Not only did Muybridge prove that the horse’s hooves came completely off the ground at the same time when galloping, but he also created the first photographs of motion.

Later, Muybridge invented a device, called a zoopraxiscope, to turn the still photographs into a motion picture. He did this by transferred the images onto a glass disc. The images were then projected from the disc onto a surface. When the disc was spun, it showed the images in rapid succession, therefore creating a motion picture.

Muybridge became obsessed with these photos of motion, called chronophotography, and used this method to capture different animals and humans in motion. These photographs were very helpful to both artists and scientists who wanted to study human and animal bodies in motion. His discoveries eventually led to the invention of motion pictures, or movies, that we watch today!

Now that you’ve learned how the first motion picture was created, you can make your own. The first way we are going to do this is with a flipbook. Here is a flipbook of Muybridge’s photographs. For a flipbook all you will is need several notecards or you can cut up small pieces of cardstock, a binder clip, and a pencil. First, decide what you want your motion picture to be about. A cat walking? A flower growing? A car racing? Mine is going to be a fish jumping. For the first piece of paper, draw the first thing you would see in that motion. For each page after that, draw the next phase in that motion. The smaller the movements and the more pieces of paper, the longer and more realistic your motion picture will be.

For your second motion picture, we are going to create a stop motion video. For this you will need some sort of moldable clay, a surface, and a phone or tablet with a camera and stop motion app. There are a lot of free and inexpensive stop motion apps you or an adult can download. Again, decide what you want your motion picture to be about. My son and I decided to create one about an octopus eating a taco. I made the octopus and he made the taco. Then we broke down each motion by moving the clay slowly and taking a picture after each movement. At the end we uploaded the pictures to a stop motion app which created the video. Here’s our Octopus Eating a Taco movie.

Just like Muybridge, you guys made motion pictures by creating still images and then animating them! If you post your videos on social media be sure to tag us at UCR ARTS! Thanks for joining me and stay tuned for our next video!