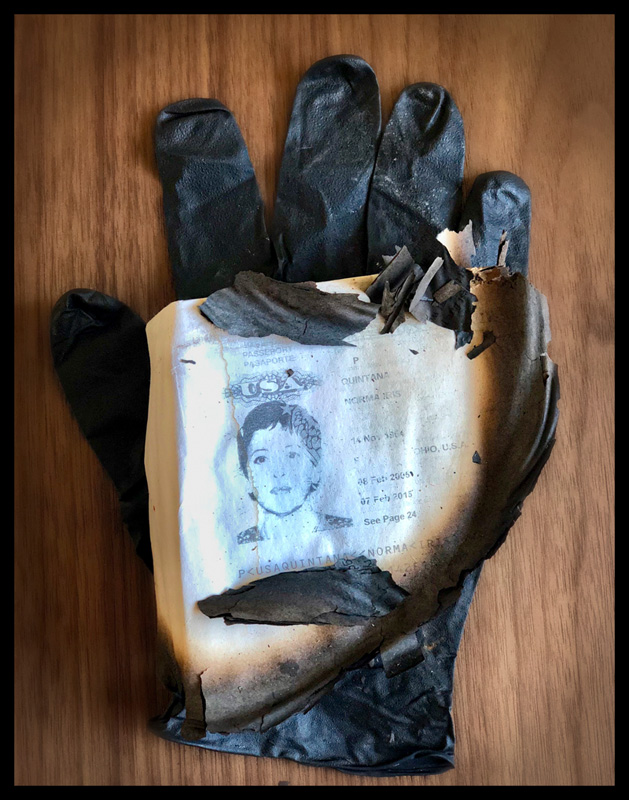 Norma I. Quintana crouches in the white ash of utter destruction. With black- gloved hands, she sifts surviving seared objects from the debris of what had been her Napa home and studio for twenty- eight years.

“It was difficult to register the totality of our loss,” she recollects. “But as I looked closer, I noticed a strange, unexpected beauty in the ashes. I began to recognize objects—a pin, a wristwatch, a statuette of a clown, camera bodies, kitchen tools.” Quintana’s home was destroyed the night of October 8, 2017 by the Atlas Peak Fire. The family had five minutes to flee.

Quintana quickly came to regard the surviving fire fragments not as mere objects, but as containers of memory. She developed a ritual of salvage, survival, and recollection. She placed each recovered remnant of her previous life on the back of a rubber glove employed to comb the wreckage and she used her iPhone X to make photographs. “I have always been a documentarian and a collector, looking, hunting for meaning in my surroundings.” In the ashes, memory becomes meaning, and meaning memory.